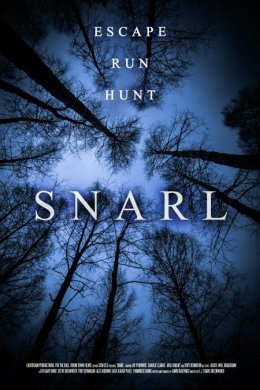 The Director of independent horror short Snarl is set to debut a brand new clip from the film at Bloody Flicks Awards on Saturday 22nd February 2020 at the Boiler Works, Stoke on Trent.

L.J Stark-Greenwood will be joined by star Charlie Clarke (who won Best Actor at the Bloody Flicks Awards in 2019) to discuss the film with Festival Director Paul Downey.

England. 1934. A young man, Elijah, has been captured and accused of being a werewolf by Clyde, a self famed bounty hunter from a nearby village. As Elijah is brutally tortured in a vain attempt to get him to confess, he suddenly finds himself secretly released by two villagers, Faye and her younger brother Benjamin, who believe he is innocent.

As they attempt to help the young man flee through the woods, all the while pursued by the maniacal Clyde, the night time forest suddenly reveals that some legends are not a myth at all.

“I am delighted to have some of the cast and crew from Snarl coming along to the Bloody Flicks Awards.

13 short films have been chosen to screen at the Bloody Flicks Awards earlier this month, with indie feature 10/31 Part II also being shown on the day.

Authors Lou Yardley and P.J Blakey-Novis and film director John Williams will also be joining us on the day for Q&A’s about their work.

Tickets for the Bloody Flicks Awards are just £3 each and are now available on Eventbrite.