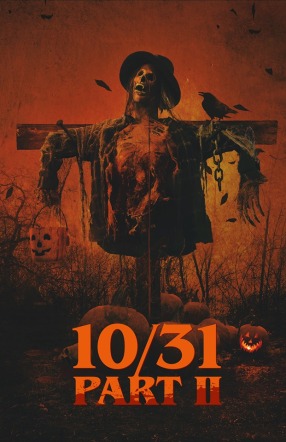 The UK festival premiere of independent horror anthology 10/31 Part II, will take place at the Bloody Flicks Awards at the Boiler Works, Stoke on Trent on Saturday 22nd February 2020.

This will be the first time the film, which was released in October 2019 will be screened to a UK festival audience alongside the previously announced 13 short films.

Join horror host Malvolia the Queen of Screams as she celebrates this year’s Halloween Monster Marathon with 5 new tales of terror and the macabre. This Halloween horror anthology from independent horrors best and bloodiest directors is a grab bag of treats you are are sure to enjoy.

10/31 Part II will be introduced by Malvolia, the Queen of Screams who has recorded a special message for all attendees of the Bloody Flicks Awards.

“We are delighted to confirm the screening of Scream Team Releasing’s fantastic horror anthology 10/31 Part II.

“Readers of our site thoroughly enjoyed the first entry in the series, so we are looking forward to screening the next chapter at the Bloody Flicks Awards.”

Tickets for the Bloody Flicks Awards are just £3 each and are available on Eventbrite.