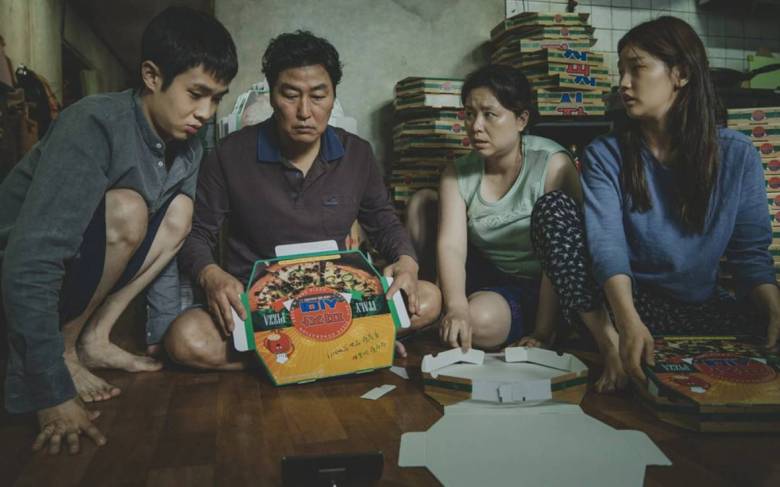 Bong Joon Ho’s dark class-war comedy Parasite came out on top at the 40th London Critics’ Circle Film Awards, winning Film of the Year at a star-studded black-tie ceremony held at the May Fair Hotel, presented by Pearl Pictures Productions.

The South Korean phenomenon also took Director of the Year for Bong at the awards, voted on by over 150 of the UK’s leading film critics.

Actress and writer Sally Phillips was the host of an evening that also saw The Souvenir take a pair of prizes: Joanna Hogg’s bittersweet 1980s memoir was named British/Irish Film of the Year by the critics, while its 22-year-old leading lady Honor Swinton Byrne received the Young British/Irish Performer award. Another multiple winner was Noah Baumbach’s searing divorce drama Marriage Story, recognised for its screenplay and Laura Dern’s supporting performance.

Joanna Hogg was one of four female directors honoured at the evening, which also saw French auteur Céline Sciamma win Foreign Language Film of the Year for her sensual period romance Portrait of a Lady on Fire, with Syrian journalist-turned-filmmaker Waad Al-Kateab, alongside co-director Edward Watts, taking Documentary of the Year for her shattering Syrian civil war diary For Sama.

Veteran British filmmaker Sally Potter, meanwhile, earned the critics’ highest honour, the Dilys Powell Award for Excellence in Film, for her oeuvre of daring, formally inventive feminist cinema. She was presented with the award by actress Elle Fanning, star of Potter’s films Ginger & Rosa and The Roads Not Taken, which premieres at the Berlinale festival next month.

For only the second time, two honorees were selected for the Dilys Powell Award, which was also presented to legendary costume designer Sandy Powell, 28 years after her trailblazing collaboration with Potter on the film Orlando. A third special presentation, in honour of the awards’ 40th anniversary, was made to beloved British animation studio Aardman.

“I’m thrilled that the critics have recognised the work of so many female filmmakers, and rising talents along with established greats,” said Film Section Chair Anna Smith, who hosts the Girls On Film podcast. “Our members see almost every film released in cinemas, so our awards are a true reflection of the the most acclaimed films of the year. If you’re wondering what to watch, look no further than our results.”

American stars swept the top acting categories, with Renée Zellweger named Actress of the Year for her immersive turn as Judy Garland in Judy; her co-star Jessie Buckley was on hand to accept her award. Joaquin Phoenix’s dynamic performance in the title role of Joker earned him Actor of the Year — an award he previously won for The Master. Supporting awards went to Dern and The Irishman‘s Joe Pesci.

In the British/Irish acting races, two stars were honoured for their body of work in 2019. British/Irish Actress of the Year went to Florence Pugh, star of Midsommar, Little Women and Fighting With My Family, and Robert Pattinson was named British/Irish Actor of the Year for his performances in The Lighthouse, High Life and The King.

Other winners included Cornish director Mark Jenkin, named Breakthrough British/Irish Filmmaker for his microbudget indie hit Bait; production designer Barbara Ling, who received the Technical Achievement Award for Quentin Tarantino’s Once Upon a Time… in Hollywood; and Dylan Holmes Williams, whose surreal The Devil’s Harmony was named British/Irish Short Film of the Year.

For the eighth year running, the event was held at the May Fair Hotel, with Audi returning once more as the official car of the awards. Presented this year by Pearl Pictures Productions. Its first feature, the British-Dutch thriller The Host opened this month in US cinemas, and comes to the UK in April. Other sponsors at the event were Rémy Martin, Vestal Vodka, Whitley Neill Gin and Double Dutch mixers.

FILM OF THE YEAR
Parasite

DOCUMENTARY OF THE YEAR
For Sama

BRITISH/IRISH FILM OF THE YEAR: The Attenborough Award
The Souvenir

SUPPORTING ACTOR OF THE YEAR
Joe Pesci – The Irishman

BRITISH/IRISH SHORT FILM OF THE YEAR
The Devil’s Harmony

TECHNICAL ACHIEVEMENT AWARD
Once Upon a Time… in Hollywood – production design, Barbara Ling

THE DILYS POWELL AWARD for EXCELLENCE IN FILM
Sally Potter

THE DILYS POWELL AWARD for EXCELLENCE IN FILM
Sandy Powell