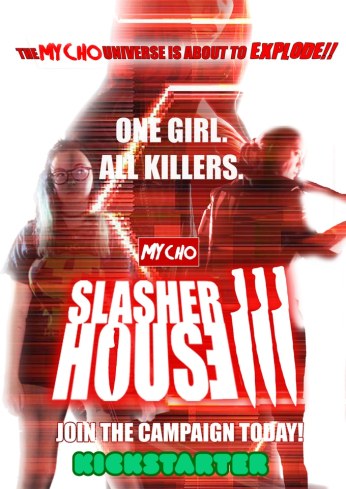 A Kickstarter campaign has been announced for the third film in the Slasher House series from Mycho Entertainment.

When we left Red last, she had won. Beaten all the Slashers of the Slasher House and it seemed that she was on her way home. She was wrong, dead wrong.

Red finds herself out of the frying pan and into the fire as she discovers the truth behind Project Slasher House and H.E.X.A.G.O.N. as Red makes her last stand against an army of Government ops and new deadlier killers as she heads toward the final confrontation with her father and the truth will finally be revealed.

Slasher House 3 will take us further into the Mycho Universe than ever before. Up until now all events have led only as far as the Slasher House. Now in the final chapter of the Slasher House Saga we will truly understand what lies beyond the walls of the House of Horrors.

Slasher House 3, like the previous entries in the series, introduces a whole new roster of Serial Slayers to the Mycho Universe. Only this time with a huge difference. This time they will be unveiling 25 slasher villains into the Mycho Universe…some classics, some cameos from other world-class filmmakers. But Mostly a new range of brand new, never seen before monsters and maniacs for you to behold.

Perks for this crowdfunder include producer credits, Blu Ray and DVD packages plus download copies of other Mycho titles.