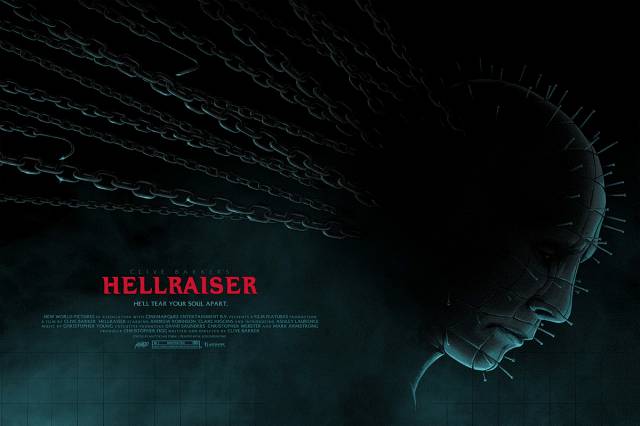 It’s been thirty years since the theatrical release of ‘Hellraiser’ and so this is the perfect time to bring you the first of eight successive reviews of the ‘Hellraiser’ movie franchise, a series that no-one saw coming when the first one burst on to cinema screens all those years ago.

And being slightly long in the tooth I did in fact attend the screening of the film on the first day of its 1987 UK theatrical exposure. It’s perhaps difficult to recapture in writing the impact of the movie on British cinema-going audiences at the time, particularly when it has since attracted a fair amount of criticism for its supposedly dated effects and overall clunkiness of direction.

But at the time there was simply nothing like it being produced in western cinema in terms of gore (although certain eastern directors at the time were making movies that would give it a run for its money) and indeed it was one of only a small handful of UK genre films brought out that year.

Unlike some other horror films of the period, this one didn’t focus on a group of teenagers being menaced by an audience friendly wisecracking supernatural villain. There are some gag lines in ‘Hellraiser,’ but because of the relentlessly dark content they kind of hang in the air like a bad smell. And lest we forget that the title of the film takes its name from the 1973 hit by glam rockers ‘Sweet’.

For those of you who don’t know the storyline, welcome back from Mars. Kirsty, a young girl, reunites with her father Larry and her stepmother Julia who have just moved into a house previously occupied by ultra thrill seeker Frank, Larry’s brother, with whom Julia had a torrid affair.

Frank has gone missing but actually he’s trapped under the floorboards in the top floor of the house, a weird shrivelled corpse whose return to human form is triggered by receiving some of Larry’s blood in an accident. Partly revived Frank uses still besotted Julia to supply him with victims to bring him back to rude health, but it’s not long before four Cenobites (explorers from another dimension with a keen awareness of pain and suffering) who have been after Kirsty’s reconstituted uncle, arrive back on the scene keen to drag Frank, Kirsty, and anyone else they can get their talons on, back to their own dimension.

It’s been well documented how this still essentially British production was fiddled with by the US money men, who Americanised the feel (if not the locations) of the film to make it attractive for export. And yes there’s always going to be a ‘what if’ feeling as to the version audiences might have seen if first time feature director (and author of the story on which the film was based) Clive Barker was allowed, and given the budget to bring the intensity of his original vision to the screen.

But there’s still enough low budget depravity going on (despite the stirring string score of Christopher Young trying to convince us otherwise) to give us a strong whiff of the original intent.

Overpoweringly this is a film with little or no moral compass at all, where the viewer is given the choice of bad or badder for antagonist. I personally love the scene where the glamorous Julia – brilliantly played by stage and TV actress Clare Higgins – ‘seduces’ a lone, trouserless salesman in the house, with bloody Frank waiting on the sidelines for his human fix.

It’s comic and frightening at the same time, and yes some of the rest of the film can stretch credibility as well as narrative coherence, but scenes like this show it to be a milestone in horror film making, far too good to simply laugh off.