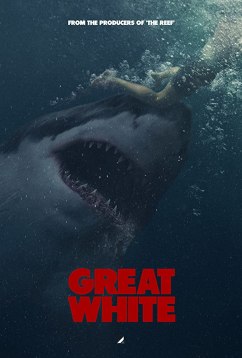 Based on a true story, Great White is set to take a bite out of viewers in 2021.

Currently in post-production, Great White leaves five passengers on a flight stranded in the ocean following a freak accident.

Trapped on a raft, 100 miles from shore they are hunted by man-eating Great White sharks.

The screenplay was penned by Michael Boughen (The Loved Ones), and we caught up with him to discuss the film.

How did you get involved with Great White?
Michael Robertson has been a friend for many years and he mentioned he was planning a new ’shark’ movie and needed a script. I said I write one for him and he agreed. I had an idea germinating already so the timing was perfect and over a Christmas break, I wrote the first draft.

How hard was it to strike a balance between true events and fiction for your story?
Not a problem as the ‘real’ version of events revolved around a shark leaping out of the water to attack – as happened in South Africa when GW jumped into a boat, scared the hell out of the occupants, and when a shark in South Australia attacked an outboard. These creatures do things like that and that intrigued me.

What were your first conversations with Director Martin Wilson like?
I liked him from the first moment. He knew what he wanted and it synchronised with what I felt the story should be. He’s a passionate filmmaker, it’s what I always look for when I’m producing.
We had a fabulous rapport and talked constantly about refining the script and getting more out of it. It’s a process I really believe in and developing the characters is great fun. We discovered more and more about them which I hope gave our cast the chance to buy into their particular story and journey. Yes it’s a thriller but its got characters you want to see survive

This was Martin’s first feature film, how do you think he handled stepping up from TV and short to this?
When I first saw him on set it was like he’d been doing feature films for years. He was prepared, ready every day and knew what he needed and how to achieve it. His relationship with the cast was great. Marty is a really great filmmaker. He deserves every success.

What sort of scale can we expect from Great White?
It’ll be a cinematic experience with lots of action and the occasional bit of humour, which is always good as it gives the audience a breather. There are quite a few scenes I know will really have the audience on the edge of their seats. Expect the unexpected!!

Are you a fan of shark films yourself?
Yes, Jaws scared the hell out of me and yet intrigued me because of its approach, not seeing the shark until well into the film. Sharks evoke tremendous fear in most people! And remember you never see them until it’s too late and you never know what they are going to do until they do it! The perfect scenario for a film!

What do you think keeps drawing audiences to this sort of film?
Fear of the unknown. Sharks are demonised of that there’s no doubt, it’s their domain and we invade it. We all have a fear of being eaten and being in water restricts how we might fight back as by nature aren’t water dwellers. It’s an alien environment to us and there’s nowhere to run if we piss a shark off!