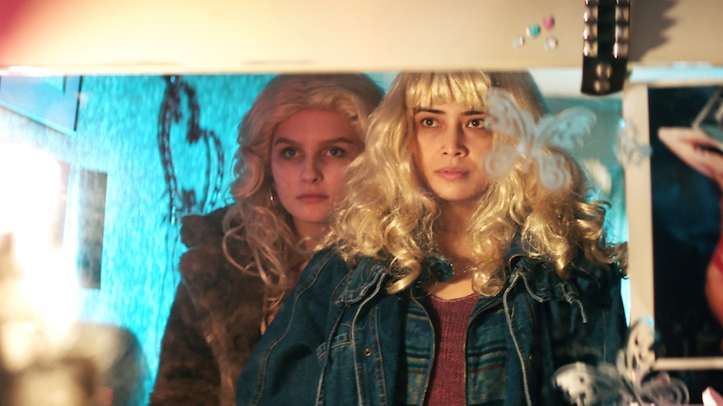 It seems like there are still lots of stories to be told about the death of the American dream, perhaps re-ignited by the existence of a certain ginger demagogue currently hiding out in the White House.

Anyhow the setting for ‘Stray Dolls’ is a motel complex somewhere in the midwest of the USA, run by Una (Cynthia Nixon), a woman of eastern European descent. Una ostensibly runs a straight ship, apart from the prescription pills racket she has going on with her son Jimmy (Robert Aramayo).

Into this set up walks Riz (Geetanjali Thapa) an Indian girl who has just arrived in the country and lands a job as a chalet maid. She is forced to room with Dallas (Olivia de Jonge) a freewheeling Texan girl and addict who just happens to have a thing going on with Jimmy. Although Initially appearing innocent, it isn’t long before Riz shows her true colours, with a knack for lock picking and a criminally entrepreneurial sense; while cleaning a room one day she breaks into the occupant’s suitcase and discovers a large wad of cocaine, which she steals. This theft triggers a series of events which end in murder, betrayal and a downward spiral of ill luck for the two girls.

There’s no denying that Sonejuhi Sinha’s debut feature looks the part; the locations are suitably drab and despairing and Shane Sigler’s photography inspects each character carefully, looking for their flaws (unsurprisingly Sigler’s background is in documentaries).

But despite the authenticity on show and the integrity of all the key players – Nixon’s performance as the embittered motel manager is particularly strong – there’s something that doesn’t ring true about the events of the film. Sinha keeps her characters’ motivations fairly occluded, but when murder is introduced into the mix I just didn’t believe the characters’ responses or actions.

Likewise while I understood that a key theme of the film is the Trumpean irony of including a cast of different ethnicities and backgrounds surviving in a grey economy against a MAGA backdrop, there isn’t one hint of racism in the movie; everyone’s disagreements are about the breakage of trust rather than perceived origin.

‘Stray Dolls’ is an ok film that survives because of the cast that bring the story to life, but despite their skills they’re asked to convey a story which strains credibility at times, which does not endear one to it. A shame, but Sinha is clearly an interesting director and worth watching.