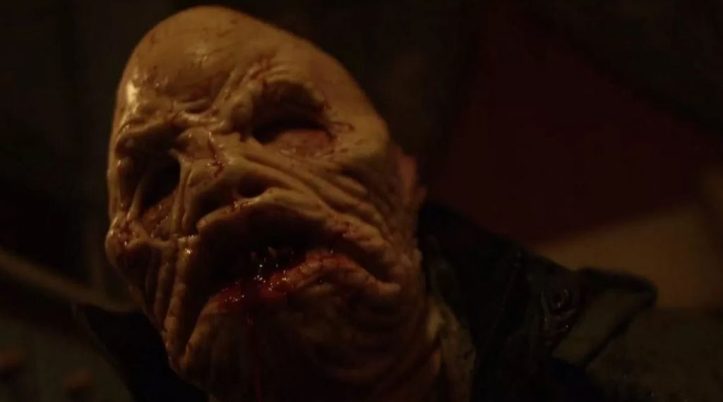 Actor Sam Lane has become one of the first names on the cast list for Dark Temple Motion Pictures for their ever-growing monster roster.

Lane has played a fish mutant in The Barge People and has recently wrapped a role on the upcoming A Werewolf in England. We caught with Sam to discuss his beginnings in acting, playing monsters and his ambitions in the industry.

Tell us about how you got into acting?

I got into acting when I was at school, at the time it was just something to do and I didn’t take it that seriously. Really I just love being on set, it’s such a unique experience, that’s what really got me into it.

You seem to have made a habit of playing monsters and villains in his films since was this your idea or did it happen organically?

A bit of both really. I have always enjoyed the physicality of playing a monster, it seems to come somewhat natural to me which is kind of disturbing. I love doing stunts and practical effects. It’s always the best costumes as well, in my opinion, something completely different than me.

Tell us about a typical day on-set with Charlie Steeds?

The first thing that comes to mind is a lot of laughter. Charlie has a way of picking a good group of people that are really passionate about what they do, the end result is a great atmosphere and it’s something you want to be a part of. It’s never anything fancy you can be guaranteed to find at least a couple buckets of fake blood and for some reason, it’s always freezing cold! Must be something to do with night shoots in the UK.

Which has been the most complicated costume/practical effect you have been involved in so far?

In ‘The Barge People’ there is a shot where my character (Razor) slowly rises out the water in the middle of the night. We filmed this in a canal in England, it was 2am in the middle of winter so the water was freezing. The costume I was wearing was really buoyant which made it difficult to stay under the water. I could only stay under for about a second before bobbing back to the top again. It didn’t help the canal was only about 3ft deep so I was trying to lie flat on the bottom and then come out like I was standing. The effect we were going for was to look as if Razor was emerging from the water, like just rising up out of the water. I ended up having to hold myself under with rocks, it was difficult but the end result was worth it.

What can you tell us about A Werewolf in England?

It’s an upcoming project from director Charlie Steeds about werewolves, I play one of the werewolves and the costume was awesome. I am so excited to see how it turns out as it was a great one to film.

The Barge People has played a couple of film festivals in the UK now, how excited are you for its wider release?

I’ve managed to catch a couple of the screenings and turned up in character to Fright Fest in London which was cool. The audience responses have been really good and it was one of the best shoots to date and I think we are all really proud of it. It’s really exciting waiting for the release, I know loads of people who can’t wait to get their hands on a copy, myself included!

If you had the choice what type of monster would you like to play in a future film?

Funnily enough, a werewolf has always been at the top of my list. I guess now I’ll have to set some new monster goals.

Are you a fan of monster movies, if so tell us some of your favorites?

I’ve never really been into monster movies. To be honest I find aliens much scarier. ‘Signs’ and ‘The Fourth Kind’ are a couple of my favourites.

World pandemic aside, what projects are you hoping to work on over the next 12 months?

One week into lockdown and all I can think about is getting out. At this stage, it would be great to get involved with a project overseas, somewhere hot and tropical. I’d love to do some sort of underwater sea creature effect, that could be cool.

The Barge People is set for a DVD release later in 2020.