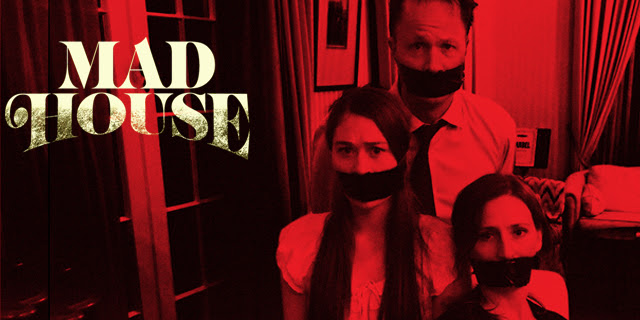 Ex pat Brit Dale Mortimer (Matt Hastings) is a successful estate agent, living a luxurious lifestyle in his suburban Australian home with his Irish wife Natalie (Dearbhla Hannigan) and daughter Gabby (the spectacularly named Tequila Rathbone). But that’s about to change. For three local junkies have got wind that the secret behind Dale’s fortune is that he’s actually a drug lord, hiding in plain site vie his real estate business, and they want some of that cash.
What follows is the junkies’ invasion of Dale’s home and their protracted occupation of it, while they try and figure out the password to his online banking set up so they can get rich quick.

So far, so seen it all before. But writer/producer/director Ross Perkins, here making his debut feature, has a few tricks up his sleeve. Firstly the entire story is told via a combination of text messages, phone cam footage and GPS tracker shots, which initially appears gimmicky but really works, offering the opportunity for various supporting characters to be introduced without overcrowding the cast list, and cutting up a rather slender story into something visually interesting.

Secondly Ross boldly gives more screen time to building the junkies’ characters than Dale and his family. The trio, Bryce (Aaron Patrick), Cass (Jess Turner) and Wes (Perkins himself) are of course an obnoxious bunch, but they’re also morbidly funny. Cass in particular is a tragic figure; a former Premier’s daughter who has run away from the good life and descended into drug use, when she discovers that she’s pregnant she cold turkeys for the sake of her unborn child, becoming steadily crazier during her withdrawal.

There is a bold combination of humour and horror going on here: some of the torture meted out to the Mortimer family is genuinely distressing (as is Gabby’s ‘stockholm syndrome’ relationship with her abusers) and, like Michael Haneke’s ‘Funny Games’ the camera pulls away at key points (or is pointed away – this is came phone footage, don’t forget) letting the viewer make their own images.

It doesn’t all work – there are some incidental deaths which jar, and there’s a final quarter coda which feels a bit tacked on – but for the most part this is clever, uncomfortable filmmaking, and well recommended.