Retro Review – Mission of the Shark 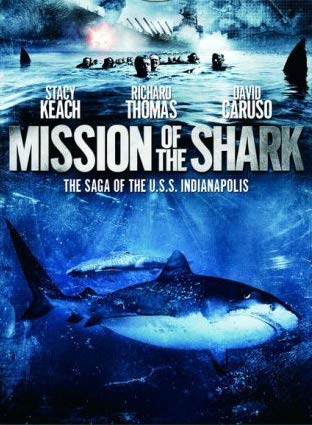 Ever since hearing Quint’s speech about the USS Indianapolis it became quite the subject of fascination for shark aficionados.

The overall story is more about the sacrifices of World War II but the disaster is still the largest shark attack ever recorded.

Mission of the Shark has budget constraints when it comes to the shark attacks but that plays to its advantage giving it a sense of realism that you certainly won’t achieve with computer graphics.

Even the actual bombing and sinking of the Indianapolis is extremely effective as we focus on characters rather than spectacle.

Much the same as the recent Shark Week movie Capsized: Blood in the Water, Mission of the Shark plays on the paranoia of the open water once the shark attacks begin.

Sometimes we don’t even see the attack which again helps to create the tension amongst the surviving crew. Couple this with their own survival instincts and some of the crew make some choices they may not even live to regret.

The most poignant part of the film and the story comes when the survivors are recovered and the cleanup operation begins. People forget that the delivery of the Hiroshima bomb was a top-secret mission that even the crew of the Indianapolis wasn’t aware of.

The Navy needed a scapegoat and Captain Charles McVey fit their bill and was court marshaled, for a charge of reckless endangerment for not zig-zagging in submarine infested waters.

Sadly McVey would take his own life in 1968 and as the Japanese submarine captain Hashimoto says when they meet,

It was estimated that 880 people were killed when the USS Indianapolis sank with a large number attributed to shark attacks from species such as the tiger shark.

Director Richard Iscove would continue to work in movies directing most notably 1999’s She’s All That. The role of McVey was played by actor Stacy Keach who featured in Sin City 2, Escape from LA, American History X and John Carpenter’s Body Bags.

The most recognizable face in Mission of the Shark is Richard Thomas who played the grown-up version of Bill in the IT (1990) mini-series.