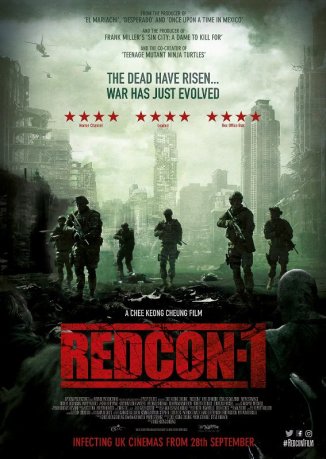 It may seem like a crazy mix throwing zombies and martial arts together in a post apocalyptic world; but Chee Keong Cheung’s Redcon-1 aims to do just that.

We got the chance to quiz the Director all about the film.

Where did the idea for Redcon-1 come from?

The original idea was a fusion of genres with a mix of action and horror and my background of directing martial arts. I was always a fan of what Danny Boyle had done with 28 Days Later and we took inspiration from this and added the ‘men on a mission’ narrative.

The martial arts and horror mix has peaked a lot of people’s interest, why do you think this is?

What we wanted to do with the people infected in this film is create a sense of awareness of the infection and also giving them the ability to fight back, which makes it a much more scarier proposition.

We did want to pay homage to the classic zombie films that have come before but also add this unique element.

What is the split between practical special effects and CGI?

Most of the action scenes are practical effects and stunts, we tried to do as much in camera as possible. From a budget point of view we didn’t have a CGI budget so the aim was to keep things as realistic as possible.

We had around 1500 background artists take part in the film, which created something of a community on-set.

We had a great special effects supervisor in Mike Knight, and he was instrumental in ensuring everyone was safe firstly, but also doing things correctly.

How hard was it to put the cast together?

The cast is a real cross section with some people flying in from the US and it was important for us to ensure we had the right actors, especially for the roles on the military. We also put the chosen actors through a week of military training to help acclimatise them to the roles they would be taking on.

We had Terry Crosby, a former Sargeant Major in the British army as our Military Advisor, who has actually served in the army in the Iraq war and he was instrumental to ensure everyone moved right and was doing things properly.

There was also a week of martial arts training too, which again was important to learn the movements.

A special mention as well for Jaz Mitchell as Redcon-1 was her debut feature and she was fantastic alongside the rest of our cast; she is very much the heartbeat of the film.

It was a good six months casting process as we wanted to be sure we got the right people for the roles.

How hard was it filming across 12 cities and keeping a consistent look to the sets?

In terms of shooting the film each location was chosen very carefully to ensure each had the right tonal elements to the production.

There’s always a sense of relief to get the film finished and our last scene to shoot was an action scene which was great to close on.

The film was really possible because of the community support we had in each city as we had hundreds of extras in each city turn up each week to be part of the film.

You are touring the UK filming scenes with the film and Q&A’s, what can we expect from them?

This is a great opportunity to re-connect with the communities who helped to make the film and show them the finished product.

We will introduce the film and it will give the audiences opportunity to quiz us about the film and the filmmaking process.

We’re pretty much in a different city everyday throughout October promoting the film and it will be great to talk to all the extras about what they liked about the film and the opportunity to give feedback.

It’s also great to have the independent cinema chains involved as well as Cineworld and Vue Cinemas, which we feel shows there is an appetite for the this sort of film.

We’ve also done promos such as zombie walk recently in Manchester, which was great fun leading into the screening.

We’re also visiting universities to talk to prospective filmmakers and talking to them and hopefully inspiring the next generation of independent directors.

Redcon-1 is out now, find a location and book your tickets HERE