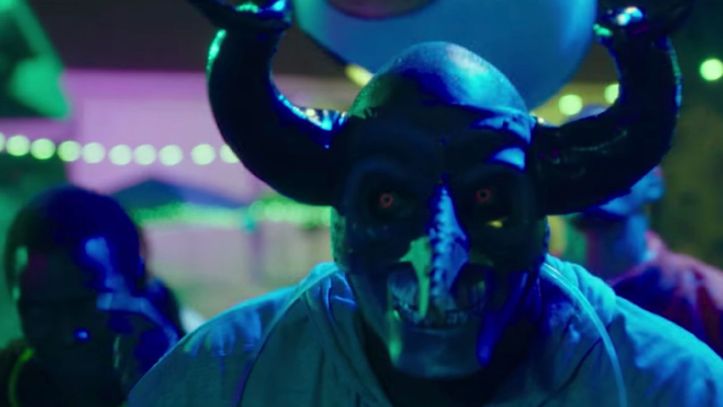 For reasons best known to himself (or rather Blumhouse) James DeMonaco, who successfully directed the first three Purge movies, has shifted over to producing and writing duties for the latest instalment of this popular Hunger-Games-for-adults franchise.

DeMonarco was scriptwriter for all the series entries so far, and one had hoped that the continuity would benefit new director Gerard McMurray, who promised much with his hazing ritual debut feature Burning Sands last year.

Sadly The First Purge is the weakest franchise entry to date. Of particular disappointment is the squandered opportunity for some ‘on point’ comparisons between the world today and the politics of The Purge.

But no, new director Gerard McMurray is almost obscenely keen to jettison anything narratively that gets in the way of a bit of gung ho action.

So as the title rather unsubtly suggests, The First Purge takes us back to the origins of the ultimate Mischief Night, where for 12 hours every year all policing of and in the US is suspended, leaving inhabitants to roam free all night, settling scores and causing mayhem with whatever weapons come to hand.

We learn a bit about the rise of The Purge’s creators, the New Founding Fathers of America, an ultra-right party that capture the mood of an America in a severe economic slump, and who want to, well, make America great again. Sound familiar?

Of course in 2013 when the first movie came out, the Donald was a shadowy figure on the electoral horizon, but the series has lost no time – up to now at least – in drawing more and more comparisons between Purge world and our own (and lest we forget, as I was remarking to someone at the screening I attended, that it’s only seven years since Blighty had its own Purge moment with impromptu city riots that were extinguished as quickly as they erupted).

The opportunity to explore the political and social development of The Purge – as an experiment dreamt up by the NFFA to reduce crime, initially confined to Staten Island, and enabled by paying volunteers $5000 each to participate – is largely ignored, and instead McMurray focuses on some almost shockingly stereotypical black characters – drug dealer, put upon nice girl with bad boyfriend etc – to tell the story of poverty stricken but basically good people caught up in bad government policy.

The rest of the plot is woefully thin, with characters having to get from A to B to escape lots of people waving weapons but presenting very little actual threat; indeed one of the more dramatic moments revolves around a pre Purge ‘dis’ between two characters – one a junkie (of course) – which signposts their eventual face off once they have weapons in their hands.

This isn’t to write that The First Purge is…well my next word was going to be boring, but actually it was in parts.

It’s leaden and ploddy, with lots of action but nowhere to go with it. What’s more criminal (pun intended) is that the dynamics of The Purge – so interestingly investigated in the previous three movies – were cast aside as the most inconvenient of McGuffins, so that McMurray could clear the stage for scene after scene of inconsequential action.