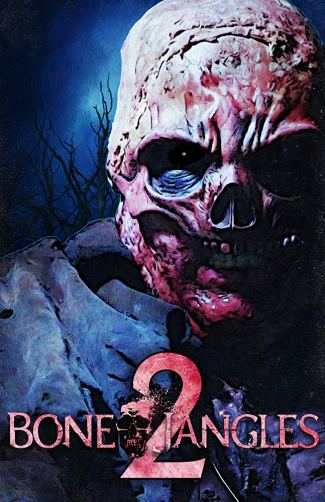 Throwback indie horror Bonejangles had just a bit of everything and now the notorious killer is back in the sequel.

We got the chance to quiz Director Brett DeJager all about the film.

Was it always your intention to do another Bonejangles movie?
Definitely!
When I signed on to direct Bonejangles I had spoken with Keith (writer) about his intent of having Bonejangles  1-3. I’ve read the scripts and they really are a horror fan’s dream! So I’m really excited to shoot the trilogy and finish the story of Bonejangles.
What new elements are you bringing to the story this time around?
Bonejangles in my opinion is a fun horror movie with over the top comedic elements and Bonejangles 2 will be a lot of the same.
The only thing different is that we’re doing everything BIGGER & BETTER. With a bigger budget and the character development already established from Bonejangles, we get to work with a script that’s really jam packed with classic horror elements.
The first film had a host of inspirations, what films/characters will Bonejangles 2 tip its hat to?
Bonejangles 2 stays true to the classics but it really hones in on the Halloween franchise this time around.
Do you think this story has franchise potential?
Absolutely!
If I didn’t think it had franchise potential I wouldn’t be gearing up to direct a sequel. I think it has all the necessary elements for horror fans to sink their claws into.
What was your crews first reaction to the idea of Bonejangles 2?
They were really excited to hear that we were ready to move forward with Bonejangles 2. I had been dodging that question from fans for at least a year now (ever since Bonejangles released on a wide scale).
Is the aim to have as many or more practical effects as the first film?
BIGGER & BETTER. That’s one of my top priorities. It’s going to be an over-the-top gorefest!
You can support production of Bonejangles 2 on IndieGoGo HERE