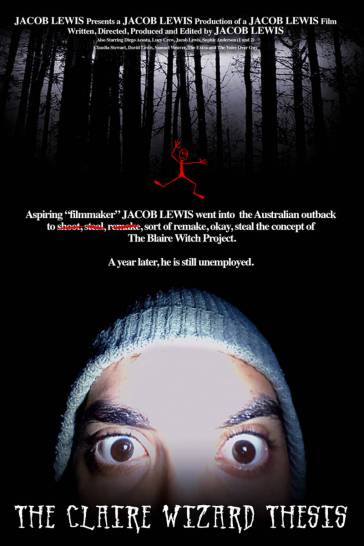 Shamelessly looking to exploit the success of The Blair Witch Project; The Claire Wizard Thesis is the film within a film parody.

Played for laughs more than scares we enter the ego of Jacob Lewis, a Writer/Director who wants to more Tarantino.

The most interesting dynamic is between Lewis and his brother the cameraman who constantly bicker at each other from both sides of the camera.

The downfall of the film is that some of the ‘laughs’ don’t really work and are repeated throughout which starts to drag.

Admittedly the film is throwaway fun, it feels a bit short and seems to just end without really closing everything off.

If you are looking for a parody of the found footage horror genre then this could be for you; although I feel it won’t age well past initial viewing.

The Claire Wizard Thesis is now available on Amazon Prime