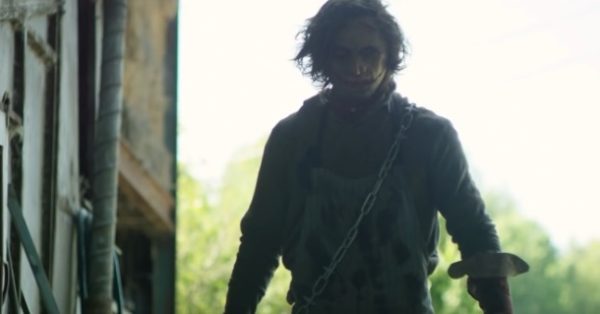 Admittedly many will be drawn in by the B movie-esque title of this twisted horror but Escape from Cannibal Farm is a surprisingly layered story.

The film does cover some ground already trodden by an infamous face-wearing chainsaw wielder from Texas, but quickly becomes its own thing entirely.

A family getaway becomes a trip to hell when they encounter the blood thirsty Hanson family (an ode to the late Gunnar Hansen I guess.)

We do get the gore quoted promised from the title but with many twists and turns the story is an evolving one that only becomes fully realised in its final moments.

Katie Davies-Speak’s Jessica evolves into a final girl worth your time and her on-screen brother Toby (David Lenik) becomes an endearing and tragic character.

That’s the thing that got me about ‘Cannibal Farm’ how it layed out some real emotional clout on both sides of the story. When things go bad you really feel for this family because they have been so fleshed out (bad cannibal pun I know).

Although the finale is slightly rushed with plenty to tie up, Escape from Cannibal Farm is a gruesome horror that takes its leads from B movies of the past but rises above them with its chainsaw swinging in the air freely.

Whereas Leatherface tried to turn a Chainsaw movie into a roadtrip to face laceration, ‘Escape….’ is a story about family, and the twisted things you will do for them.

This is definitely a chainsaw massacre full of buzz and most importantly bite.