The mythology behind Krampus 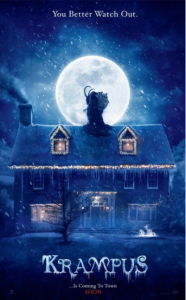 While many of you have either seen or at least heard of Michael Dougherty’s 2015 Christmas comedy horror Krampus, you may not be as familiar with the mythology behind it.

The film starts off bizarrely appearing like a standard family Christmas films, with comical twists. Set in a store during what could be Black Friday sales, the film begins showing us the worst sides of Christmas with a slapstick twist. People are shown animalistically fighting over gadgets and toys, being tasered and thrown about, showing the funny side of the Christmas chaos.

A very Anti-Christmas theme setting up the tone of the film, it continues showing a family losing their belief in the holiday and thus summoning the ultimate anti-Christmas entity, Krampus. The film succeeded in making the pagan demon a household name and giving it acknowledgement, but it does fail to truly explain the legend behind the film’s antagonist.

Krampus is an anthropomorphic mythical creature from Germanic folklore, said to be a demonic beast and in some texts the offspring of Norse Goddess Hel, ruler of the Helheim (the realm of the dead) and youngest daughter of Loki. The name Krampus originates from the German word Krampen (translating to ‘claw’) and his legend starts not only on the night of Christmas Eve but in early December, much like other traditional German celebrations. However, while now highly associated with the Christian holiday, Krampus’ roots are more likely dated back to pre-Christian Alpine traditions.

What does Krampus do?

The legend of Krampus tells of a being who works as a counterpart to St Nicholas. While St Nick gifts well behaved children, Krampus instead punishes children who have been judged to be naughty rather than nice. The traditional Germanic fairy-tale says December 5th night, known as Krampusnacht, St Nickolas visits marking houses out by leaving candy canes for the nice and birch tree branches for the naughty ones, in boots left outside. Joining St Nick on his travels, Krampus then selects naughty children to beat them with the branches or stuff them in his sack to take back to his lair, where they will be tortured and taken to the Underworld or even eaten by the horned beast.

Although his appearance can slightly differ according to different texts, Krampus is usually depicted as a large beast who is half goat, half demon, draped in a long red coat with white trimmings, quite like Santa. He has large horns that curl up from his monstrous head, long black claws and massive stomping hooves. Misbehaving children will hear him before they see him due to the chains wrapped around his body, with cowbells attached to them. Large fangs protrude from his mouth with a long-pointed tongue in-between them, and he also carries a large sack for kidnapping the children and a bunch of birch branches to swat the bad children he finds.

Who celebrates Krampus’ legend and Krampusnacht?

While now becoming a bigger part of popular culture with more information being published about the legendary beast, he is still primarily celebrated only in several European countries; Austria, Bavaria, Croatia, Czech Republic, Hungary, Slovenia, South Tyrol and parts of Northern Italy.

Lienz, Austria keeps their traditions going by hosting a modern annual Krampus parade known as Perchtenlauf or Klaubaufe. The parade includes men dressing up in Krampus costumes consisting of fur suits, wooden masks, carrying cowbells while they march through the streets or drunken men dressed as the creature chasing after people while dressed as these ‘devils’. In some celebrations Krampus is joined by St Nickolas as well as other companions of Santa such as the Angels or Woodsman and others. The costumes traditionally were made from goat or sheep skins and animal horns but for modern audiences now they are often made from faux fur and latex.

During these festivities it can be customary to drink Krampus schnapps, a strong distilled fruit brandy and even during the early 1800s people have been exchanging cards that including Krampus which usually contain comical rhymes and poems.

In Styria, Austria some families are said to place painted gold twigs on display throughout the year as a reminder to any children in the house to behave and not to forget the legend of Krampus.

Now becoming more of a notable creature, more popular and commercialised in the media and through its celebrations. In American media, he has made media appearances in; print, – comics and books- television, -both live action and animation-, video games and film. Notably in popular paranormal show, Supernatural and Fox’s adult animation, American Dad.

A revival of the traditions, such as Krampuslauf or Krampus Run has recently taken place thought out; Austria, Germany, Slovenia, Hungary and The Czech Republic, along with a new interest within the United States. At the festivals it is now common to see people selling chocolates, figurines and toys, collectable horns and other trinkets.

As the festival is part of the tradition and culture that the Alpine towns wish to continue, authorities had to explore ways to educate visitors and refugees who would be arriving around the time of the festivities about the history around the legend to prevent them becoming frightened, while also taming the horror aspect to more of a humorous, family friendly affair.

Some describe celebrations as a chance for ordinary people to get in touch with their animalistic side, North America are becoming more familiar with Krampus, with their celebrations now being a growing phenomenon, everything from bar crawls to full Krampuslauf runs taking place within cities in America, including; Washington, Toronto, Chicago and many others.

Not only a holiday horror but also a pagan folklore cautionary tale to young trouble makers and non-believers of the festive holiday. So now you are aware of Krampus be sure to be well behaved or you might find branches in your stocking this year and are in store for an unwelcome visitor.