Interview: Pennywise the Story of IT producer Gary Smart 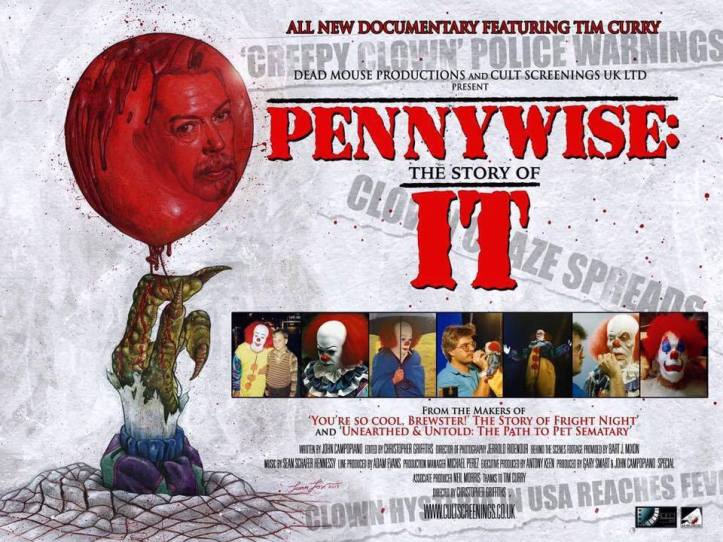 With the stunning success of the IT remake earlier this year, it’s a great time to be a Stephen King (let’s just try to forget The Dark Tower ever happened.

Another exciting project on the horizon is ‘Pennywise: The story of IT’ which is currently in production. The in depth documentary from the makers of ‘Unearthed Untold the Path to Pet Sematary’ and ‘You’re so Cool Brewster’, will unite the majority of the cast and crew from the 1990 mini series from Tommy Lee Wallace.

We got a chance to speak to Gary Smart, Producer of the documentary about all things IT, here’s what he had to say:

Who came up with the idea of revisiting the mini series of IT?

As a fan of the mini-series ‘IT’ I was very keen to work on a documentary on it for our next project. After confirming with the Cult Screenings team I reached out to John as I knew that he was also thinking about a doc on ‘IT’. We had a long discussion and decided that it would be a great idea for us to team up and work on the project collectively.

What was your first reaction when you first saw this 27 years ago?

I was about 8-years-old when ‘IT’ was first aired in the UK and remember my nan purchasing the VHS for me a year later. I instantly fell in love with ‘IT’ the Losers were roughly the same age as me so there was an instant connection there. Also as a huge film fan I knew who Tim Curry was as I loved the films ‘Clue’ and ‘Legend’. Seeing Tim as Pennywise was a dream come true and I instantly regarded him as a horror icon along with Freddy, Jason, Michael Myers, Chucky, Pinhead and Leatherface.

How hard has it been to track down as many of the original cast as you can?

We’ve been really lucky on this project as John had already done a lot of ground work on the cast and crew through interviews he conducted last year for a horror website. So we went into this project with at least 10 confirmed interviewees. I had already worked with Bart Mixon twice and also with Tommy Lee Wallace so I knew how passionate they were about ‘IT’. Tim Curry was the icing on the cake and it took a good few phone calls and emails from John and I to get him on board. We are also lucky to have Michael Perez on board the project who is key to tracking down the cast and crew too.

With Crystal Lake Memories and Never Sleep Again, they have shown there is definitely an audience that wants to know more about popular and cult horror, what did you make of these documentaries?

Well working with Michael Perez I have to say I like ‘Never Sleep Again’ and ‘Crystal Lake’ ha! Seriously though if it wasn’t for Thommy Hutson’s work on Never Sleep Again there would be no ‘Leviathan’, no ‘You’re so cool, Brewster!’ no ‘RoboDoc’ and no ‘Pennywise’. Thommy is a great guy who I get a long with very well and his docs are amazing!

It must be an absolute honour to work with Tim Curry on this too?

Pennywise really is about Tim and his legacy. We’ll be covering the making of, behind the scenes, the legacy of ‘IT’ but the main focus will be Tim and his amazing portrayal. Its an absolute honour to have him as part of this and I am really humbled that he said yes. I’m a huge Tim Curry fan!… who isn’t?

From reading the book, what was the one scene or sequence you were disappointed didn’t make it into Tommy Lee Wallace’s version?

I always loved the leper character in the book, in the series they hinted at him when Stan goes to the old house and Pennywise appears in bandages. But the new version of the leper from the on-set pics looks really creepy and more true to the book.

Do you feel the ending of IT gets unfair criticism?

I think people have issues with the ending and assume you’re referring to the large spider?  But for me its all part of the fun and tone of the TV series. After 27 years it looks a little dated but from a nostalgic point of view its pretty fun.

What release date are you working towards and how can fans get hold of the final product?

‘Pennywise’ will be released in Mid-2018 on Blu-ray and DVD.

Keep up to date with Pennywise: The Story of IT on Facebook HERE