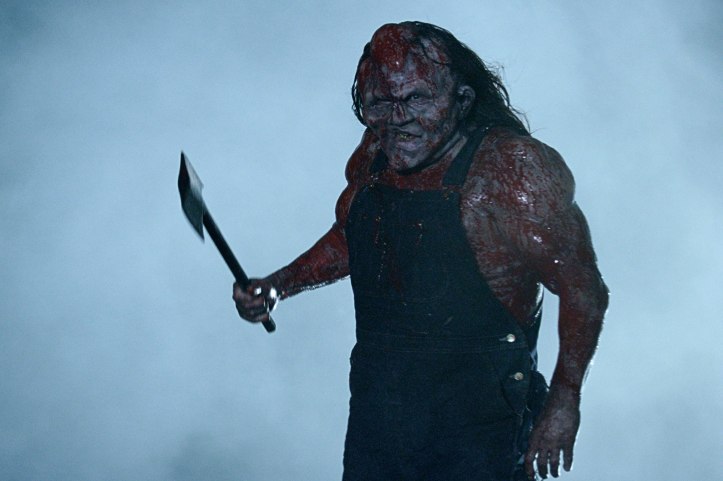 Adam Green’s films are for the fans and as a fan myself, his latest movie earns himself a special place at FrightFest.

In my eyes, Adam is a director with such enthusiasm that even his brilliant FrightFest intro videos that he makes with his friend Joe Lynch encapsulates what fans know and love about him; we’re all about to see something really special..and we weren’t wrong.

The Hatchet trilogy kept horror fanatics hooked by its deformed swamp killing monster Victor Crowley (played superbly by Kane Hodder) and at the end of the 3rd film all seemed finished with yet you cant keep a dead guy dead (!) for very long as the horror rises again.

Set ten years since Crowley was killed, sole survivor Andrew Yong (Parry Chen) publishes his book of his survival from the swamp even though he is suspected of completing the evil deeds himself.

Agreeing to a lucrative deal to return back to the scene of the massacre, Andrew heads back out to Honey Island Swamp also being visited by couple Chloe and Alex and their clingy friend Rose (Kate Booth, Chase Williamson and Laura Ortiz) opting to make their own Crowleyesque horror film Hatchetface, recruiting a local tour guide and wannabe actor Dillon along for the journey (played hilariously by Dave Sheridan.)

As all characters amalgamate to the land that should never have been stepped foot on again,  a genius if not totally implorable situation happens prompting Crowley to resurface, ready to kill all over again.

What then follows is what Green knows best; gruesome and grotesque murders, one by one in all their bloody fashion heralded by the monster’s vengeance.

The last 3 films have nicely set up a new vision for the cursed killer giving us a stronger backbone to the franchise , one that looks highly unlikely to be ripped out any time soon!

Previous Hatchet films set the tone but now Victor Crowley owns the stage, where it heads from here can only be waited on with cold swamp baited breath.

The Hatchet man is back!