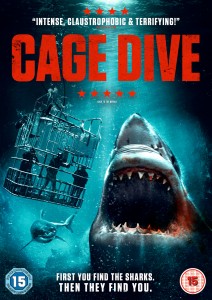 I must admit to being intrigued when I saw the trailer for Cage Dive, a found footage shark film.

Since it was announced it has become part of the Open Water series, but I would argue packs more punch than its predecessors.

You get the jist, a group of friends take a cage dive and it goes horribly wrong after a freak wave capsizes their boat and leaves them at the mercy of some hungry great white sharks.

Although not as slick as last year’s The Shallows, Cage Dive certainly packs a punch, especially in any attack scenes which seem to be getting more and more realistic and terrifying with every film.

The camcorder element adds that Blair Witch quality to proceedings and with being at sea, knocks everything just off kilter.

A mix of real shark footage with some CGI is blended fairly seamlessly and with a love triangle sub plot between three characters this adds another layer to the survivors and their actions.

My only complaint with Cage Dive is that we didn’t get into the water sooner, but once were in there’s no going back and the film becomes increasingly intense and the situation gets worse.

This is a unique shark thriller with enough action to keep you entertained, although I do wonder what Open Water 4 will look like?

Cage Dive is out now, order your copy HERE