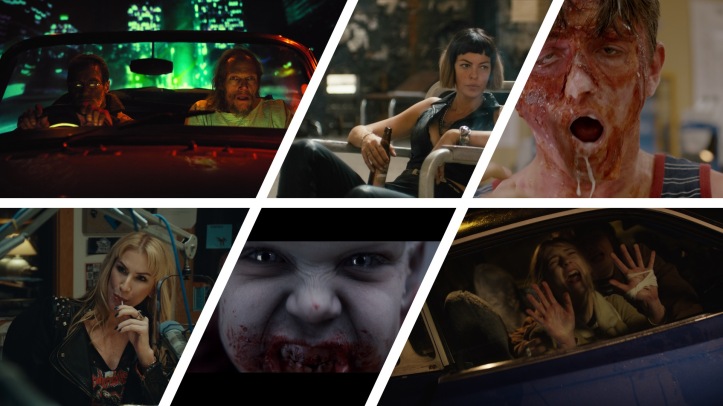 The festival will open with the European premiere of John Hyams’ harrowing psychological thriller, ALONE, featuring a powerhouse performance from Jules Willcox as a grieving widow who finds herself caught up in a savage game of cat and mouse with Marc Menchaca’s ruthless and relentless misogynous psychopath.

A focus on iconic female horror stars will feature Adrienne Barbeau (THE FOG) confronting a Faustian pact with a fracking company in the European Premiere of UNEARTH. Grimmfest favourite Pollyanna MacIntosh (THE WALKING DEAD) revs up for the European premiere of girl-gang biker revenge flick REVENGE RIDE and, 34 years after TEXAS CHAINSAW MASSACRE 2, Caroline Williams returns to Stretch’s midnight DJ slot for the European Premiere of vampire flick TEN MINUTES TO MIDNIGHT and writer-director Brea Grant and actress Angela Bettis team up for the blisteringly brutal hospital-based black comedy 12 HOUR SHIFT. There’s also Fiona Dourif as a troubled psychic facing malevolent Malaysian mysticism and her own dark past, in the World premiere of haunted house shocker, THE MEDIUM.

There’s more female-centred horror, as a wheelchair-bound woman finds herself trapped in an isolated house with a rabid dog, in the tense and claustrophobic ROPES, and an alienated young housewife begins to fear she’s a malfunctioning android in the icy I AM REN, both UK Premieres.

Elsewhere, and in direct contrast, Grimmfest present a trio of films exploring the darker side of masculinity. Paranoid jealousy leads to total meltdown, as a commitment-phobic schlub and his long-suffering girlfriend return to his family home only to encounter a bizarrely obsessive boyhood friend in the UK Premiere of the darkly comic IT CUTS DEEP. A desperate need for friendship leads an alienated middle-aged loner into an increasingly disturbing relationship with a VHS tape, in the European premiere of the unsettling RENT-A-PAL; while a laconic bar-room shaggy dog story escalates into a gory and claustrophobic Noir nightmare, in the UK premiere of THE OAK ROOM, from Grimmfest favourites Cody Calahan and Chad Archibald.

Grimmfest continues to champion independent voices in horror, with a selection of soon-to-be cult classics. Chad Ferrin screened at the very first Grimmfest, so Grimmfest are pleased to be welcoming him back with the European Premiere of the genre savvy H.P. LOVECRAFT’S THE DEEP ONES, a mischievous fusion of Lovecraft and Ira Levin, by way of Corman and Charles Band. FATAL ATTRACTION meets THE BLOB as misogynous sexual mores encounter old school EC Comics style poetic justice in the World premiere of B. Harrison Smith’s THE SPECIAL. There’s a night on the town you’ll never forget, in the UK premiere of synapsis-sizzling South African psychedelic drug-trip alien possession movie, FRIED BARRY. Body jacking parasites disrupt a polite dinner party with gory consequences in the European premiere of outrageous black comedy AN IDEAL HOST. THE BIG CHILL meets BATTLE ROYALE as a college camping trip turns into a fight for survival in TRIGGERED. And an African American family on the run collides with cannibal Klansmen in the World premiere of DEATH RANCH, Charlie Steeds’ delirious tribute to Seventies grindhouse and blaxploitation cinema.

Seventies cult cinema is evoked, too, in the UK premiere of URUBU, Alejandro Ibáñez Nauta’s homage to his own father, Spanish genre legend Narciso Ibáñez Serrador, whose most famous and notorious film, COULD YOU KILL A CHILD? is ruthlessly reimagined for a new generation.

Nimbly surfing the wave of retro-80s nostalgia, the World premiere of THEY REACH, pays pitch-perfect homage to the US teen-orientated genre cinema we all grew up with, while the UK premiere of THE UNHEALER offers a more contemporary take on the high school horror film and some fine supporting roles for Lance Henriksen and Natasha Henstridge.

The Online format has also opened up possibilities for additional programmes, so Grimmfest is taking advantage of our newfound scheduling flexibility to add some additional, exclusive content that will only be available to full festival pass holders.

Features include a ruminative reimagining of the old school “demon child” movie in the UK premiere of emotionally devastating STRAY. A timely documentary celebration of what binds us together as a community, in THE HORROR CROWD. Tables are turned to terrifying effect, in the UK premiere of the visceral and confrontational ANONYMOUS ANIMALS. Long-form shorts include the UK premiere of BLUE & MALONE in which a weary journalist has an eye-opening encounter with her own past, there’s an encounter with the in-laws from hell in the UK premiere of PATRICK IS OUTSIDE, and we’ve squirm-inducing body horror in the stomach-churning HUNGRY JOE and the utterly nightmarish THE ALTRUIST, which receives its UK Premiere.

Grimmfest will also host an exclusive panel on Iconic Women in Horror, featuring some of the stars of this year’s selected films, talking about their careers. Guests are already lining up for Grimmfest 2020. Lance Henriksen (ALIENS), Pollyanna McIntosh (THE WALKING DEAD), Caroline Williams (TEXAS CHAINSAW MASSACRE 2) and Adriene Barbeau (THE FOG) will all join us for Q&As, with many more yet to be confirmed.

“It’s been a challenging process translating the Grimmfest experience into an online festival, that people can enjoy from the safety of their own home, but we’re truly proud of this year’s line-up. We’ve secured some fantastic feature and short film premieres, and we’ll also have guests galore joining us via live linkups for Q&As and seminars”.

“We can’t wait to unleash this wonderful selection of movies on Grimmfest fans. Online, at home, but together in spirit. We hope everyone joins in, watches all the films and connects with all the amazing filmmakers. This year, you won’t be able to chat to them at the bar, but you can ask them questions as part of our ‘Live’ online Q&As. So, grab your popcorn and settle down at home, for five ‘full-on’ days of brilliant movie premieres. It’s gonna be a blast!”

Tickets for Grimmfest 2020 are now available on their website.