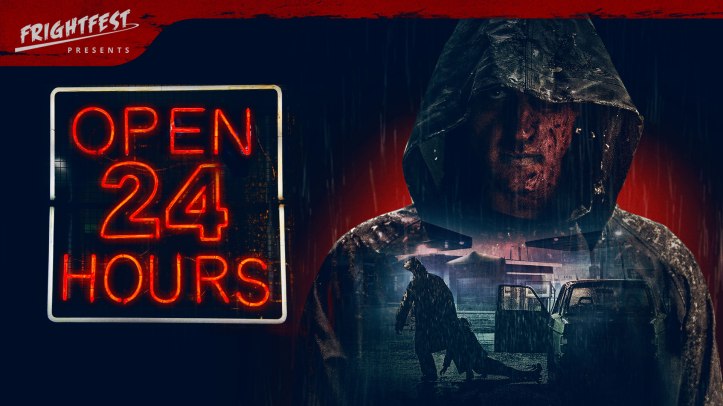 Padraig Reynolds’ first feature as director, back in 2011, was ‘Rites of Spring,’ a torture porn-y slasher mixed with a creature feature. Nearly ten years on and he returns to the same themes, albeit with a more prosaic villain.

Mary (Vanessa Grasse) is a young girl who’s already had a life full of misery. Newly released from prison for setting fire to her boyfriend, she’s under pressure from her probation officer to secure a job as part of a reform plan. An opportunity arises with an opening at the Deer Gas Market, a petrol station/convenience shop in, guess what, the middle of nowhere, US of A.

Because the owner is desperate for someone to cover the night shift, despite her lack of experience Mary aces the interview and before you know it she’s given the keys to the store and provided with only the briefest of inductions by co-worker Bobby (Brendan Fletcher).

As if this set up wasn’t unbelievable enough already, Mary is clearly in no condition to hold down any kind of a job. For pre-prison she was the boyfriend of James (Cole Vigue), the so called ‘Rain Killer’, a murderer of 35 women. When Mary discovered some of James’s victims in the flooded basement of a house, he turned her into ‘The Watcher,’ making her complicit in future killings by threatening her with death if she blabbed. She finally saved herself by torching the house – with James inside – and made her escape. James was subsequently tried and incarcerated, ‘burnt to a crisp’ but still alive, but Mary was also given a sentence as an accomplice.

So now here’s Mary, in charge of a shop, scarred with extreme PTSD and subject to horrendous flashbacks of her life with James. Various innocent visitors to the store become entwined in her delusions, but the real kicker comes when she receives news that James has escaped from jail and knows where she’s working.

While ‘Open 24 Hours’ is efficiently, nay ruthlessly mounted, there’s something rather unappealing about watching a young emotionally damaged woman being menaced by a scarred, hooded killer for nearly half of the movie. Yes, I understand that this is good old fashioned stalk ‘n’ slash territory – various people get in James’s way and are messily despatched with that trademark wet slurp sound that’s become ubiquitous – but it just doesn’t feel very vital these days.

It’s a well-edited film and doesn’t stint on the shocks, but the premise is so unbelievable that it was hard to find my way into the story. Grasse is very good as Mary; it’s a difficult role because she has to demonstrate deep trauma while eliciting some sympathy from the audience (although a final shot will have that same audience possibly re-evaluating what they’ve previously seen).