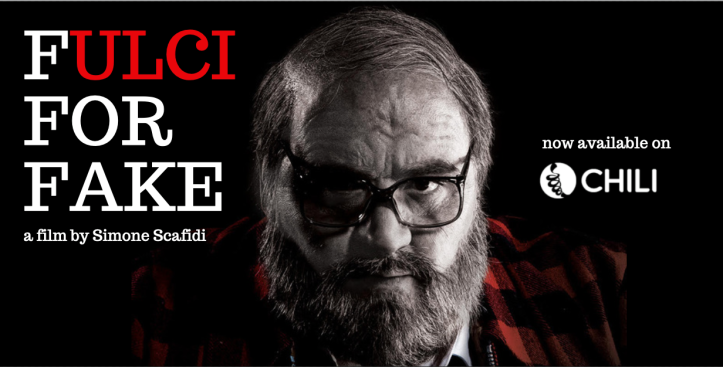 Despite its awkward title (a nod both to Orson Welles’ freeform 1973 documentary ‘F For Fake’ and Fulci’s tendency to embellish stories of his life) and an odd wraparound concept wherein the film’s narrator/guide Sandro Bitetto is supposedly to play Fulci in a (n unmade) biopic, but must first talk to a range of people who knew him, this is far from the hagiography that films like this can sometimes offer up.

Lucio Fulci’s career has often been seen as a game of three thirds: his fledgling work, predominantly comedies, his l’age d’or of classic horror films, then his decline with a string of low budget movies with little to recommend them, before his untimely death at the age of 68 in 1996. And to some extent his documentary supports that view. But what makes it really interesting is trying to understand, via interviews with friends, co-workers and in particular his daughters Camilla and (towards the end) Donatella, the context in which those career phases operated.

From his directorial debut, the mobster comedy ‘I ladri’ in 1959, the first ten years of Fulci’s career saw him leading a rather charmed life. This successful time broadly coincided with his marriage to Marina, with whom he had two daughters (although it is disclosed, rather ruefully, that he wished for boys). The suicide of Marina in 1969 signals an end to his lighter filmic work and marks a period where his output took a darker turn, and those interviewed are keen to emphasise that the two things are entirely connected.

A host of Italian talent, such as musician Fabio Frizzi, director Michele Soavi and actor Paulo Malco are on hand to talk about their experience of working with the notoriously curmudgeonly director – newsflash, he was a grump – with a generous helping of clips guaranteed to send you straight to the director’s back catalogue.

But it’s daughter Camilla’s words which carry the film. Near crippled in a riding accident shortly after her mother died which broke her spine, and further blighted with a disease which became fatal (she died early in 2019 very soon after completion of the documentary), she eloquently describes how her father coped with his tragedies while being incredibly stoical about her own: it’s left for others to describe how Fulci (possibly) channelled his feelings about his daughter’s poor health into his films, culminating in his most challenging work, ‘The New York Ripper’ in 1982.

Italian horror buffs won’t learn much new from this documentary, but it remains a fascinating profile – rather than anything particularly profound – about a director originally much loved in his own country but largely hung out to dry on the basis of his later work.