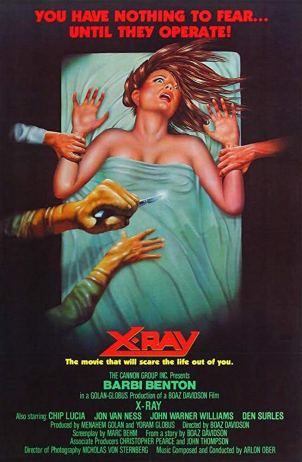 While My Bloody Valentine is the most obvious slasher to watch on Valentine’s Day, there was another film released the same year that deserves a second appraisal.

X-Ray aka Hospital Massacre follows Susan Jeremy as she becomes trapped in a hospital and is stalked by a killer masquerading as a doctor.

In the opening scene, a young Susan’s friend is murdered by another child after she rejects the boys Valentine’s card and mocks him. The hanging of a young child is quite jarring but also sets us up for the violence to come.

Starring adult film star Barbi Benton, the film was released at the height of the slasher boom of the early 80s as studios clambered to piggyback on the success of Halloween and Friday the 13th.

The funniest thing about X-Ray was the fact that the hospital where Susan becomes entrapped celebrates Valentine’s Day in such a big way.

There is a unique mix of gory kills and comedy, which includes some very nosey elderly women who indirectly helped to save our final girl on one occasion.

X-Ray also suffered from cuts from the BBFC to attain a release, with three minutes chopped off the running time, although this has been restored in recent releases on DVD and Blu Ray.

While the killer is not as iconic looking as My Bloody Valentine’s Harry Warden, X-Ray offers enough gore to keep the average slasher fan satisfied.

X-Ray is available now on Blu Ray from 88 Films.