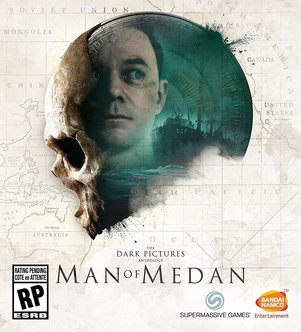 For fans on Until Dawn, the announcement of a new anthology series was music to their ears.

Supermassive Games clearly saw what worked for Until Dawn and have employed these tropes into the first of this new series; Man of Medan.

Again we are tasked with different characters with an array of personalities who all get the choices about various things which will come to the fore as the game progresses.

Although slightly glitchy on the initial play, Man of Medan quickly finds its feet in an intriguing prologue as we follow two navy men transporting some dead colleagues and mysterious boxes back towards home shores.

When the crew is mysteriously killed by an unseen force we can only speculate to the wider plot. From here we meet a group of four friends (including most notably Shawn Ashmore as Conrad) who have hired Fliss to take them out on a diving trip to some old World War II wreckages.

We get more hints to connect both of the stories but Man of Medan takes its time establishing characters before really unwinding and getting crazy.

There are plenty of jump scares that mostly hit the mark but where Man of Medan really shines is in creating an eerie atmosphere.

It will be fascinating to see where the sequel Last Hope will go next.