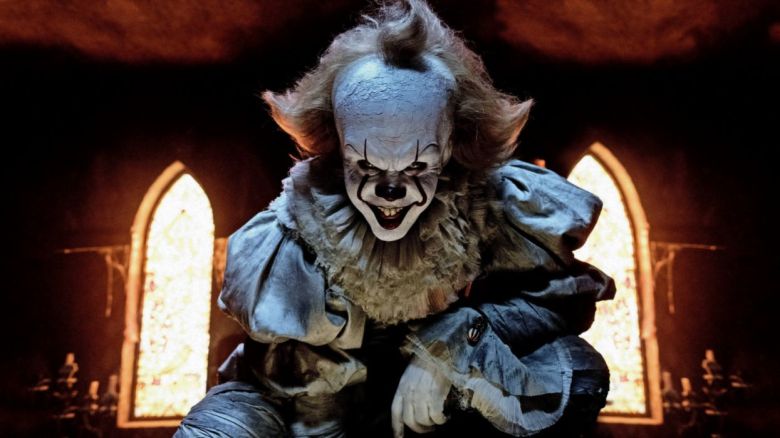 With the new adaptation of IT proving a box office juggernaut, we ask will our favourite killer clown return for another round in Derry?

Well, the answer is yes, as we caught up with Dr. Charlie Allbright, to discuss his new book Stephen King’s IT: Culture and the Clown.

Tell us about the first time you read IT?
I was about 13 and at an experimental drama summer camp. It was a weird environment. We were mixed age, mixed gender and ran around the woods doing Shakespeare (especially Macbeth) by way of vaguely sexual interpretive dance. I’d got very close to a lad called Danny who’d been sent there as his dad had just gone to prison for what I now think was probably pedophilia.

That summer was one hell of a way to tackle my bad case of the awkward…. I’d been reading Point Horror – things like Nightmare Park – for a few years and my tent buddy lent me IT, suggesting I skip “the gay bit” a chapter in. She was a smoking, drinking wild child with a social worker dad and I was always terrified around her.

Reading the passage about Adrian Mellon hooked me because it was so adult – I can remember my utter shock at how Adrian’s boyfriend, Don, describes Derry as “like a dead strumpet with maggots squirming out of her cooze”, partly because of how they dared to behave and partly because it reminded me about where I lived in a town gone to seed (and gone bad) in Lincolnshire, England.

After that, I was hooked on The Losers. They were the heroes, but even the leader (Bill) was very much less than a perfect role model. I rather admired the fact that he owned his selfishness because avenging Georgie is the only overarching thing he can think to do with himself.

I’d always got annoyed at media reflecting kids where everything was good versus evil – good always won and it bored me rigid (a notable exception being the Dungeons and Dragons cartoon).

Nothing in those stories ever really changed. IT was a breath of fresh air because there were genuine stakes (the adult story opens with suicide) and an acknowledgment that children could understand and be affected by guilt, jealousy, hate, etc. After starting reading IT at that summer camp, the book’s more surreal aspects (such as the God-turtle, Maturin), strangely didn’t phase me that much.

What are your recollections of the 1990 miniseries?
Jonathan Brandis. I’d seen him in Neverending Story 2 and was fascinated by the weight he seemed to carry. An incredible maturity, and sadness, along with those leadership qualities.

I also loved the way Seth Green was a performer to the core with perfect timing and physical expression to emphasize his lines, even if his version of Richie Tozier is a rather better entertainer than kid Richie is in the book. Tim Curry’s Pennywise’s sadistic humor intrigued me – I loved his chutzpah, but the clown never scared me. What the Losers do to themselves, on the other hand, did.

Do you feel it has aged well?
The kids’ section has aged particularly well. Those kids were pretty much cast to their characters, playing themselves. The adult’s section also has its interesting segments, such as Pennywise’s bully-banter with Richie in the library and Bev’s meeting with Mrs. Kersh (which still gives me the willies when you hear her dad’s voice coming off the shriveled corpse of the old woman).

The music remains incredible (I interviewed composer Richard Bellis for my book) and while it’s easy to take the piss out of the spider, it was bloody good for the time.

After seeing Chapter 2 Skarsgard or Curry?
Curry all the way for me. There is a lot of nuance to his performance, whether he’s just standing and pointing or outright threatening the other characters.

He moves between completely acceptable behavior and cruelty to emphasize that it is the behaviour of which we are uncertain, rather than just violence that is scary, because we don’t know how to act. It is before he gets anywhere near the special effects.

How different do you feel Cary Fukunaga’s IT would have been?
Well, that depends partly on the version of the script you’re looking at. I analyzed all of the leaked scripts for my book. The first one written by Cary Fukunaga and Chase Palmer has a lot of focus on sex. It includes the introduction of Judith, the painting that menaces Stan, as a sexual predator who tries to lure him as he prepares for his bar mitzvah, something that never happens in the book.

The headliner, however, is Bev. This script talks far more about child abuse than the book does, and Bev is shown as a femme fatale. Her dad is also far more sexually aggressive, telling her he loves her as he does his wife and starts to remove his belt, although he does get his comeuppance.

The revised Fukunaga-Palmer script mixes these extremely hard-hitting moments with outright surrealism – Stan has become a goldfish and gets accidentally fried at the Hanlon’s newly-inserted burger bar.

My suspicion is that either of these versions of the film would have swung pretty madly between a very adult tone and this very grim comic absurdity. Given how uncomfortable some people were at the childhood sexuality in the book (Bev instigates group sex), I suspect audiences would have pitched a shit fit if any of it had actually been recorded, let alone released.

What are your thoughts on the initial casting of Will Poulter as Pennywise?
I liked the casting. He has an intensity and a slightly off-kilter quality that would have suited the character as written in the script. Judging from his work in Black Mirror: Bandersnatch, I think he would make for a believable orchestrator.

How do you feel IT/Pennywise has infused into popular culture?
Primarily through Curry’s portrayal. He had become like a sinister uncle people seemed to like being scared by. Folk gets excited about owning up to being scared by him. Skarsgard’s portrayal is changing that.

The ‘anyone can do it’ make-up, combined with the easy access we now have to digital shopping, has made him attainable and he’s become a flirtatious, playful, there-to-be-identified-with (or wanted) horror mascot who can be bought as a prop and now has more in common with Freddie Krueger or even Harley Quinn than the paedophilic, sinister mind-shifting entity from the book. You can’t really see Curry’s Pennywise in a cute meme with The Babadook as a gay dad.

What do you think it is about clowns that make them scary?
The most straightforward answer is they change the social rules we have to interact in and we don’t know to act around them. It’s no accident that Stephen King equated bullying business leader and now President Donald Trump with Pennywise. Clowns have a cultural legacy of being allowed to do what they want because they hold a mirror up to us to show us our supposed foibles, but at the same time we’re never really sure if we really want to see what we think those foibles are.

Do you think IT is King’s masterpiece?
For me, yes, so far. The story is incredibly thematically expansive and absolutely huge in scope. It examines topics from racism through to body positivity in a way that, sometimes, the rest of the world is still catching up with.

I did a world-first experiment for my book that showed the way King actually sets the story out on the page also shows how his written style makes it more effective for the reader.

If Chapter 2 is the all-conquering beast at the box office do you think Pennywise will be revived for an original sequel or prequel?

I’d be surprised if they don’t try and do something. Money tends to talk, and Funko would be pissed off if they didn’t if no one else was! Articles coming out say director Andy Muschietti and Pennywise-actor Skarsgard talked with Stephen King and already have something sketched out, but I remain unsure.

The book will always be there and it’s kind of like the proprietary feeling of having a shared secret of knowing so many folks only have the redux version as it is, but I am nervous that the public perception of the heart of this incredibly complex monster could become of a cheap bogeyman.

Having seen all of the screen versions of IT now, is there something from the book you wish was featured in either version?

I was actually really pleased with IT: Chapter Two as it included most of my favorite scenes (the Second Hand Rose shop sequence with Bill is brilliant in terms of the effects of paranoia, and though they play it partially for laughs, its sadism remains).

That said, I’d have loved to have seen the sequence where Bev goes home played absolutely canonically, although it would have been horrific to watch as Mrs. Kersh becomes so lewd.

I would also love to see the first Ritual of CHUD done as it is in the book. A bit of the book becomes the script at the end of the film, but in context it’s this wonderfully exhilarating moment where The Losers as kids throw caution to the wind and engage in a really wacky psychological duel with a god turtle who talks (or talked, in my head) like an old Rastafarian who’s mentoring the kids through the battle knowing he can’t do it for them. It’s that world-weary but oddly safe.

It is The Losers’ willingness to just go with it rather than getting freaked out that is so wonderful. It’s barking and yet oddly believable at the same time.

How did you find the opening scene with Adrian Mellon in Chapter 2?
I’ve written about it in depth for The Guardian. I think the scene was effective but loses a little thematic impact in translation because the characters are toned down – in the book, Don (Adrian’s boyfriend) is wearing silk pants “so tight you could read the wrinkles in his cock”.

The film frames Adrian and as heroes, in order to give its ‘homophobia, is wrong, kids’ message, rather than asking the viewer whether they’re going to side with the bullies and Pennywise because Adrian flirts with his attackers and his boyfriend dresses differently in King’s version. That said, the performances in the film are incredible.

When is your book planned for release?
The hope is to get it out in the next few months – we’re speeding through the final bits of publication now. I had to wait to see the second film to finish everything off just right.

Look out for Stephen King’s IT: Culture and the Clown, set for release this winter.