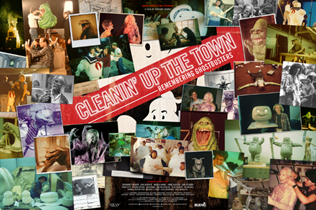 CLEANIN’ UP THE TOWN: Remembering Ghostbusters, directed and produced by the UK brother and sister team of Anthony and Claire Bueno, receives its European Premiere at BFI’s IMAX Cinema on 3rd December ahead of its theatrical release with both filmmakers in attendance.

Celebrating 35 years since Ivan Reitman’s cult favorite Ghostbusters manifested on the big screen, the film pays a fitting tribute to the whole creative team behind the global phenomenon that continues to enchant audiences to this day.

CLEANIN’ UP THE TOWN: Remembering Ghostbusters, is the definitive retrospective documentary, resulting from twelve years of research and production.

In addition, the documentary hallmarks the extraordinary achievements made by the filmmakers working in visual effects era before the game-changing Jurassic Park.

It reveals a story of ingenuity, innovation and emphasises just how ambitious an undertaking the making of Ghostbusters really was.