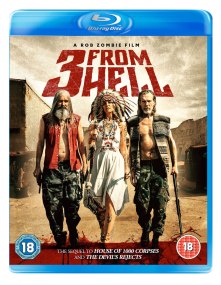 Fourteen years after, arguably Rob Zombie’s best film The Devil’s Rejects, he returns to familiar territory with 3 From Hell.

It’s an easy argument to say Zombie has never strayed away from the crazy hillbillies motif that has been prevalent in most of his films but let’s judge this on its own merits.

What TDR did so effectively was to flip the dynamic of the hunter and the hunted and minorly humanize monsters. Sadly, all of that good work is undone as soon as the remaining Firefly’s escape captivity.

You realize in the short time he is in the film that Sid Haig (who sadly passed away recently), was the real star here and once Captain Spaulding exits things really go downhill. This is where the film has something fresh to say but sadly this is shoved to the side for more gory craziness.

The best thing about 3 From Hell is the social commentary on violence and the idolization of serial killers by the media and in turn ‘fans’.

Otis is sprung from prison by newly introduced half-brother Winslow and from here the dynamics change as Otis tries to take on Spaulding’s almost father-like role with Winslow feeling completely out of place.

Sadly Richard Brake doesn’t have the gravitas of Haig and so any sort of monologue he carries is extremely flat.

And so we come to Baby, who after ten years in prison (under the guise of Dee Wallace nonetheless) has gone even barmier and it’s her reckless actions that ultimately put them in more danger as they once again go on the run.

There is an overarching plot here that comes full circle as the Three find their way to Mexico.

3 From Hell is just too long too, clocking in at just under two hours there are long stretches where nothing really happens and because of the limited dialogue of the characters that we have come to expect, there’s nothing here to really keep us interested.

It’s a tough act to revisit a former glory and make it work, but sometimes it’s best to leave well alone.