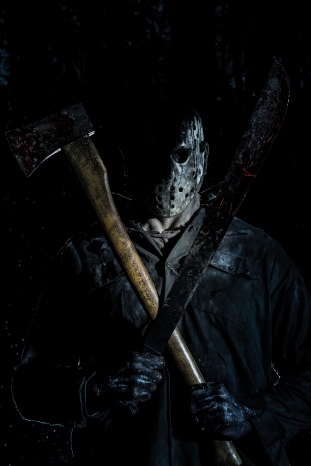 Horror’s prodigal son, Jason Vorhees, has been dead silent for a decade, and fans are clamoring for fresh, new stories from the familiar shores of Camp Crystal Lake.

In that spirit, a group of experienced, independent filmmakers have set out to create an exciting and ambitious new fan film that celebrates what horror devotees love most about Friday the 13th, all while exploring fresh ideas that would make Hollywood producers blush.

“Jason Rising follows Wessex County Sheriff Pete Daltry, along with local bounty hunters Jed and Bear, who are hot on the trail of three escapees from the Wessex County Corrections Farm. They soon realize that they have entered the cursed, hallowed grounds of Camp Crystal Lake, where the hunters become the hunted and history is never truly dead.”

With the incredible support of the horror community, the Jason Rising team intends to raise $20,000 through the Indiegogo platform. Fulfillment of their budget will allow them to utilize the best effects, locations, and props, along with impressive screen performances and a top-notch production team, to craft the most terrifying fan experience possible.

Unique and exciting perks for donors include exclusive merchandise, handmade hockey masks, and the opportunity to have a legitimate IMDB producer credit.

Armed with decades of collective experience and an undying love for everything Jason Vorhees, the Jason Rising team is poised to put out the most impressive fan film of the year, and they need your help!

Jason Rising is a Friday the 13th fan film created by James Sweet, Karl Whinnery, and Robert Blanche, written by James Sweet & Maurice Cardwell. We want to make clear that this is a non-profit fan film. We are in no way affiliated with Paramount Pictures, New Lines Cinemas, Warner Bros. Entertainment, or any other Friday the 13th franchise rights holders.