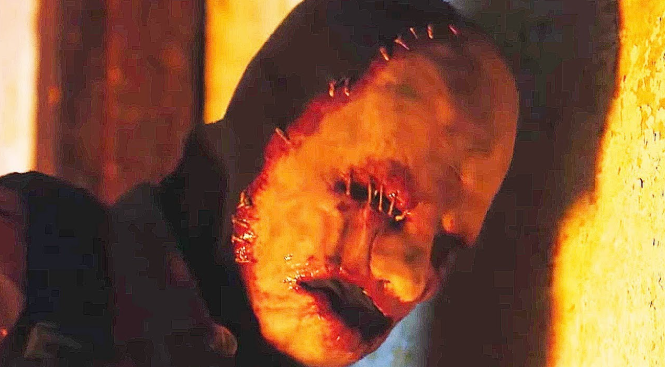 Fowler, the Mayor of Sommerton, needs a boost to his ratings, so what better to kick start the local economy than by turning the nearby asylum into a haunted house attraction, just in time for the holiday season.

Fowler recruits Spencer Crowe, former king of horror, now washed up dope and drug fiend, to co-ordinate the event. Meanwhile across town a group of dangerous inmates are being transported to a long term secure facility. Crowe, drunk behind the wheel, causes a collision with the prison van from which he escapes unscathed, but which allows two of the prisoners to escape. So where do they turn for safety? Why the opening night of the haunted house. What can possibly go wrong?

Filmed in a real life haunted house attraction, Pennhurst Asylum in Pennsylvania, Fright Fest does at least have a great location in its favour. That’s about it though, as the budget didn’t extend beyond the hire of the place and casting Dylan (Nip/Tuck) Walsh in the role of Crowe.

While the overall idea of the film is good, the final product feels rushed and uneven, and it’s nothing that die hard horror fans haven’t seen a million times. Walsh is good as the sleazy, disreputable Crowe character, and Kresh Novakovic (a relative of director Ante Novakovic I’d hazard a guess) is also good value.

The rest of the cast are little more than cannon fodder for the escaped prisoner who prowls around the attraction making short work of the rather small amount of patrons, and before you know it there’s half an hour to go, and about four of the cast (including the second prisoner who’s actually a good guy) are left trying to find their way out of the building.

And if the director thought that naming the film Fright Fest (originally American Fright Fest) would naturally appeal to the audience of the London horror movie festival, then he rather underestimated them. Fright Fest is generic and predictable, everything that the actual Fright Fest isn’t.