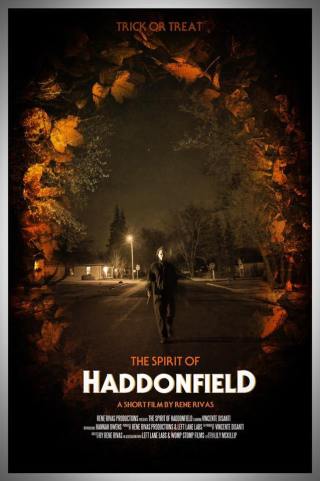 With John Carpenter’s Halloween celebrating its 40th anniversary there’s plenty of projects on the go outside of the Blumhouse produced sequel.

Rene Rivas’ The Spirit of Haddonfield intends to tell us a new tale from the hometown of Michael Myers.

We got the chance to quiz Rene about the film.

Tell us where the idea came from for The Spirit of Haddonfield?

The idea for The Spirit of Haddonfield stems all the way back to 2014. Where another slash and stalk story/script i wrote about a barista doing closing duties to notice she’s being watched by an unknown assailant outside of the shops window.

Well long story short that script was ultimately scrapped / shelved for a later date. I also always had the North Leroux street location in mind for that short as well.. So the location of The Sprit of Haddonfield has been selected for a handful of years now but was originally intended for a different project. After the project was scrapped I moved onto other film projects and more or less forgot about this little slash and stalk story for a handful of years until recently.

After jumping into Vincente Disanti’s recently released Friday the 13th Fan film “Never Hike Alone” as an Associate Producer/Grip, I garnered a lot of motivation and more or less was very inspired by that project. After the NHA project wrapped, i wanted to take a crack at it myself and make a fan film of my personal favorite film / franchise (Halloween).

I began thinking about that old project from years back and with the upcoming Fall season approaching, i shifted the story to be more Halloween oriented, ultimately deciding to make a Halloween fan film. As since the beginning of the other slash and stalk story, i wanted to use that neighborhood for it as since I’ve been living in Flagstaff, it’s always reminded me of / has a similar resemblance to the fictitious town “Haddonfield” from the original Halloween.

I remember in 2015 filming test shots in the neighborhood using myself as the stand in to get a feel for how the neighborhood would look on film (For said previously scrapped project), with a character walking through the frame of various shots. After committing to The Spirit of Haddonfield (Formally titled Haddonfield) idea in early September 2017, writing the script in September, and post the release of Never Hike Alone.. i called up Vincente Disanti and pitched him the idea of doing a Halloween fan film, and also approached him about playing “The Shape” to which he enthusiastically signed on.

It’s Halloween’s 40th anniversary, tell us what the series means to you?

There really is no other film quite like Halloween. The impact its had on pop culture and independent filmmakers alike truly stands the test of time. A 40 year old film that is still as relevant as it was back in 1978 really speaks to the fact that, regardless of if you have a million dollars to work with, or $350K to work with.. if you craft a smart, well written story with likable driven characters, with one menacing antagonist in an idyllic surrounding, and a simplistic bone chilling score.. you can create ripples with very little resources.

Halloween is a fantastic example… Its my all time favorite horror film and will always continue to be as it has not only scared me to death as a little kid, but the more i learned about the productions lack of resources, and the small teams passion to get the project complete.. the more it motivated me as a filmmaker as well. It really seems to resonate with folks of all ages, theres no film quite like John Carpenters Halloween.

How will this fan film differ from previous efforts?

I’ve only seen a handful of other Halloween fan films, so i can only speak from seeing a few. But one thing that i recently enjoyed hearing from an official trailer reaction from The Horror Show was that.. they’ve seen a lot of Halloween fan films, but this one (The Spirit of Haddonfield) didn’t  “feel” like a fan film. Being an independent filmmaker and owner/operator of my own production company.

I’ve acquired / practiced the technical skills required to tell such stories through my client/creative work, and put that technical expertise into this little fan film. While I may not be shooting with fancy ARRI or RED cameras in 8K, i utilized the resources i currently own and put them into producing this short fan film. Planning out shots and sequences months in advanced so that once we were on set.. we got the shots in a relatively fast manner as I already knew the blocking and set up for them.

I really tried to put the most effort into producing a well crafted/polished short self contained Halloween ride with no budget, and just utilized the gear i already own. Having no budget pretty much meant that i had to wear multiple hats on the project. Aside from Writing/Directing.

I was the Director of Photography/Camera OP, did the sound design, designed the lighting, the musical arrangements, the editing, color correction, the set design.. not to mention virtually all the post completion marketing trailers/posters etc. But in all reality, I’ve loved doing every avenue, every step of the way.. this has been one of the most fulfilling projects I’ve taken on to date.

Tons of passion has gone into this project and I hope when people watch The Spirit of Haddonfield, it reflects.

What has been the most fun part of filming?

Simply put, there is probably a slim to none chance that i will ever get to work on an official Halloween property.. it would be a dream come true to be honest. With that being said, also mentioned in the previous statement.. every step of the way was truly exciting.

Having your small cast and crew on set, giving direction to Vince in The Shape get up, with Hannah Owens emoting / putting her all into the part.. even the set design/lighting.. It was truly a smiling from ear to ear experience from start to finish. It was a bit somber getting the last shots as “I didn’t want the ride to end”, I don’t know.. Maybe one day if I’m lucky.. i’ll be able to work on Halloween 21.

But until then, doing a no budget not-for-profit fan film was the only feasible way to get Myers in front of my lenses. I loved it and hope to be given an opportunity one day to do more with Mikey!

Does the film have any other familiar characters other than The Shape in it?

Unfortunately, no there are no other familiar characters in this short not-for-profit fan film. Its its own self contained storyline that pays homage to the original and a handful of other entries in the series.. it does takes place in an alternate H20 universe though.

Tell us about your Michael Myers?

I really tried to capture the essence and some of the magic that Nick Castle portrayed on screen in the 1978 classic. From the little emotive mannerisms, to the slow paced yet menacing walk. Our Shape is brutal, but keeps his distance and introduces himself in fractions. He’s sneaky for as long as he needs to be.

Are you looking forward to Blumhouse’s Halloween?

I think it was 1989-1990.. to where I accidentally saw part of the original Halloween on Telemundo at my families house as a kid. It affected me on a visceral level and more or less.. scared the shit out of me, I had to leave the room during the chase scene as it was just too much. I think thats potentially what made me afraid of the dark/dark windows as a kid.

After seeing the VHS’s of the franchise for years at a suitable age, i was lucky enough to catch Halloween H20 in theatres at 13 in 1998. Seeing Michael on the big screen was an unforgettable experience in itself.. I still have fond memories of that night.

I’m not really going to chat about Resurrection because well, its not my favorite, and the Zombie takes were.. well.. not my favorite either. I appreciate his interpretation and spin on it, but more or less they just don’t do it for me. Lets fast forward to 2018 and get back to the question. I can safely say.. at 33 years of age, theres never been another upcoming movie that I’ve been more excited for.

I feel the way i did first renting the original films on VHS/recording the H20 trailers to VHS to watch them over and over again (Pre YouTube days, heh), even cutting the H20 ad’s out of many newspapers to collect them. With such brilliant minds behind this new Halloween (And John Carpenter Executive Producing/Scoring the film) this really is a huge dream come true for ALL Halloween fans. My heart was racing while watching the (2018) Halloween Official Trailer for the first time.

I just keep thinking to myself, What a time to be alive.. We are waiting just 2+ more months to get A NEW Halloween film, with a truly amazing team behind and JLC reprising her role?? I’m really excited about the new direction as well, pretty much retconning the sequels / continuing the story after the events of the original.

Lets face it, as Halloween fans.. could there ever be a more exciting film to be released?? I’m hands down more excited than I’ve ever been for the Blumhouse Halloween, its going to be a cathartic experience seeing it in theaters..

Describe The Spirit of Haddonfield in 3 words?

When can fans see the film?

The Spirit of Haddonfield will be released for FREE to YouTube on October 1st.

What’s the next project you will work on?

I think i’ll be taking on some original feature content thats already in development with co-producer and long time friend Bryan Goff. We have some neat stuff lined up and i’m excited to further the development on that project!