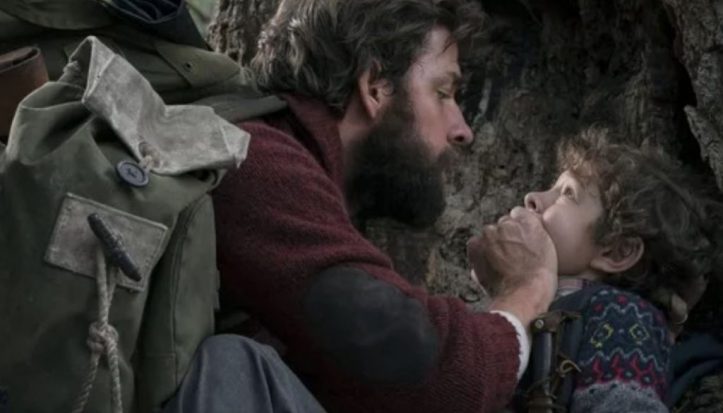 Come off the back of some severe Hereditary levels of hype, John Krasinski’s A Quiet Place is certainly one of the most sophisticated horrors of recent times.

Much in the same vein as Jordan Peele’s Get Out, we get nods to horrors of time gone by but come away with something quite original and fascinating.

A Quiet Place does pose a lot of questions, but the fact it leaves so many unanswered works to its credit; especially when it comes to its villains. Closely resembling something from Starship Troopers (until up close) they hunt humans and anything else for that matter based on sound alone.

We meet the family of our story, we guess a considerable time after these beasts have claimed the world for their own with no appparent weaknesses.

When I say sophisticated, I mean that this group are quite clever in terms of in horror films in the past we have characters who are deliberately not that bright so that when they are picked off in whatever manner; you feel they kind of had it coming.

Whereas here we have quite a resourceful bunch, so when they are put in peril you know it’s only a slight mishap which could cost them dear.

Not since Blair Witch (for me personally) have I found a film with such intensity but whereas Wingard’s semi-reboot turns it on for a bonkers last half hour, A Quiet Place picks its times and really puts us through the grinder.

This is a film literally uses sound to terrify; it may sound quite simplistic but it works to stunning effect. At just about 90 minutes we don’t overstay our welcome; this is all killer and no filler a lean mean horror of the highest order.