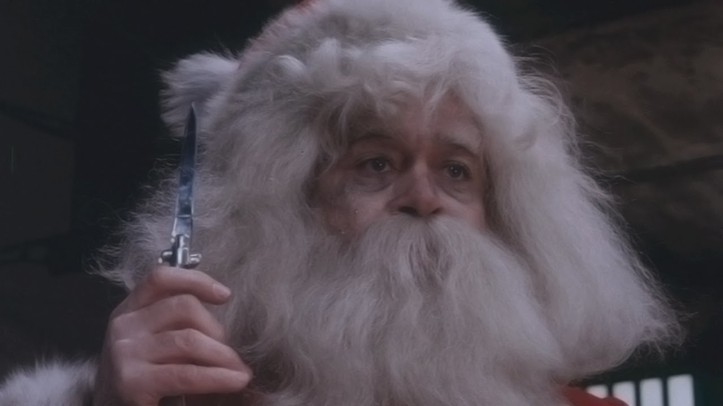 Christmas Evil (or as it was originally titled You Better Watch Out) is less a straight ahead horror movie than a moving and occasionally funny character study of a factory worker, traumatised as a child by seeing mommy kissing Santa Claus.

He dons the big guy’s suit and murderously melts down in the days coming up to ‘the most wonderful night of the year.’

Lewis Jackson, who wrote and directed this independent gem, had little experience of film making, aside from a couple of softcore sex films (the only prints of which were stolen in a storage unit robbery).

Jackson had worked on versions of the script for about eight years, finally getting the financing in 1979 by convincing the moneylenders that the film was a Yuletide cash in on Halloween.

Well Christmas Evil is about as far from Halloween as you can get (and for the record Jackson hates slasher films). Harry Stadling, the central character in the movie, is sympathetically and occasionally frighteningly played by Brandon Maggart, who inhabits the role with a de Niro like intensity.

Stadling’s childhood trauma has locked him in a kind of eternal Christmas, a mix of childish wonder and repressed hysteria, his home filled with hundreds of seasonal knick knacks. Watching him unravel in front of our eyes is often painful stuff, and Jackson keeps the camera rolling far longer than is comfortable in these scenes.

Unlike the voices of dissent which greeted Silent Night, Deadly Night released four years later, Christmas Evil is not about the demonisation of Santa Claus, but how one man with serious mental health problems uses the trappings of Christmas as an emotional crutch.

Christmas Evil was shot in New Jersey over a very cold winter, giving it an authentic feel; and the cast all look suitably chilly. There are moments of gore (added back in when Jackson reclaimed the film from the original distributors and restored its ‘proper’ title) but it’s not really about that.

This is a really well put together movie, beautifully shot, with some sensitive performances; a genuine one off from a talented director who just couldn’t get the breaks to make subsequent features.

Asked in an interview whether he had any future plans, Jackson referred to a sci-fi project called Chiller, the story of a man who gets hit with solar energy and get addicted to energy.

Wouldn’t it be great if he got that made?