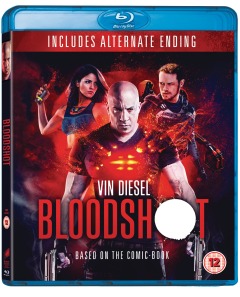 Bloody Flicks have teamed up with Sony Pictures Home Entertainment to give 2 lucky readers the chance to win Vin Diesel’s Bloodshot on Blu Ray.

Based on the bestselling comic book “Valiant” by Jeff Wadlow, Diesel stars as Ray Garrison, a soldier recently killed in action and brought back to life as the superhero Bloodshot by the RST corporation. With an army of nanotechnology in his veins, he’s an unstoppable force – stronger than ever and able to heal instantly. But in controlling his body, the company has sway over his mind and memories, too. Now, Ray doesn’t know what’s real and what’s not – but he’s on a mission to find out.

To be in with a chance of winning, answer the following question –

Name the 2000 film which Vin Diesel starred as Richard B. Riddick?

Send your answer to our Contact form, with your full name and postal address.

Please note this competition is for UK entrants only and will close on Friday 12th June 2020.